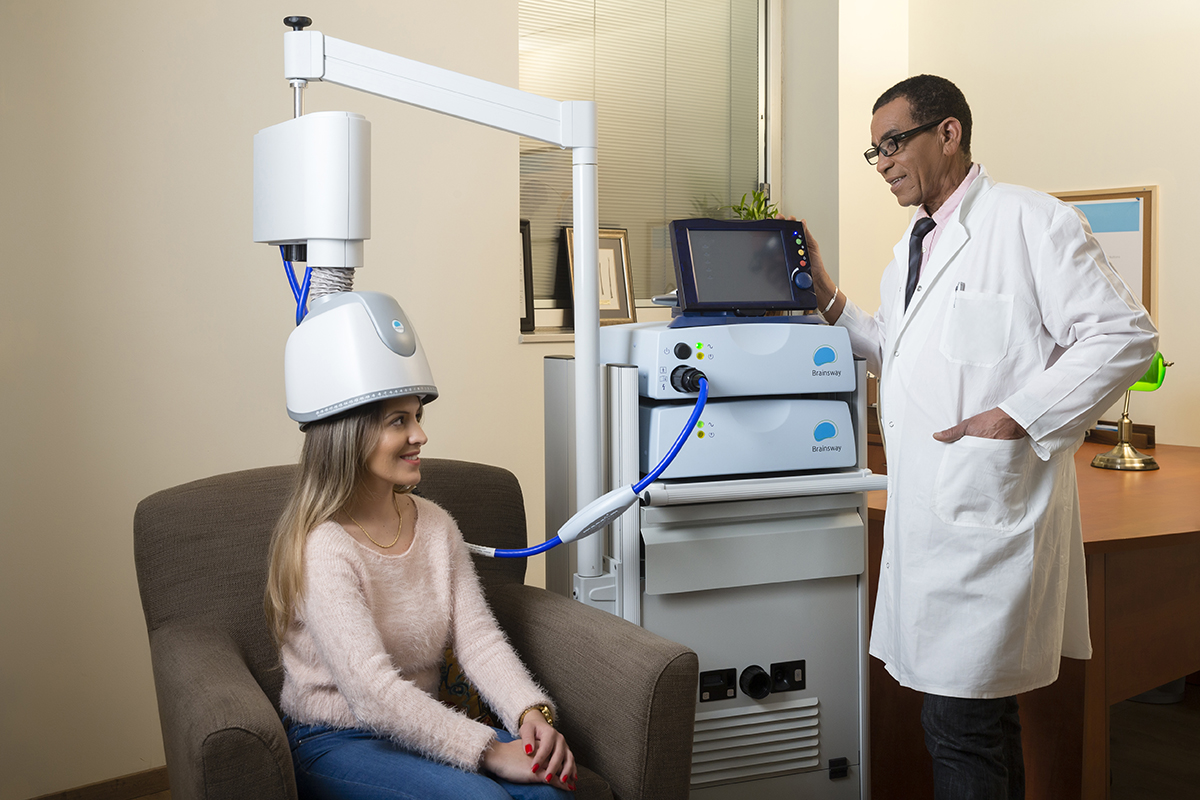 People who suffer from depression may sometimes feel that they have hit a dead end when medications and talk therapy do not help. The good news is the Advanced TMS Center offers TMS therapy for depression. TMS (Transcranial Magnetic Stimulation) therapy is a simple FDA-approved procedure that does not require hospitalization or anesthesia.

TMS therapy for depression works by stimulating a part of the brain that is involved in moods and emotions. This is not electroconvulsive therapy (ECT), and does not cause memory loss or harmful side effects.

During TMS therapy for depression, a patient sits in a chair while a helmet is gently placed over the head. An electromagnetic coil inside the helmet painlessly delivers brief magnetic fields to stimulate nerve cells in the brain that may be "asleep" because of a major depressive disorder.

TMS therapy for depression does not require sedation or general anesthesia, patients are fully awake during the treatment.

Naturally, people want to know what TMS therapy feels like before they try it. During the treatment, patients will hear some clicking sounds. People have described TMS therapy as a gentle tapping on (their head) or a heavier sensation.

A medical health care professional is always present to monitor the patient during TMS therapy for depression. The patient can stop the treatment at any time. Some patients may feel discomfort or headaches when they begin TMS therapy, but this usually goes away after the first few treatments.

About 75% of people respond to TMS therapy for depression, which is high for any medical treatment, while the full remission rate is reportedly around 50%.

TMS therapy for depression is an out-patient procedure. Patients can drive themselves to the Advanced TMS Center, and can even go to work after undergoing TMS therapy.

Coping with depression is never easy, and it can be discouraging when traditional methods do not work. The Advanced TMS Center is proud to be able to offer patients this science-based high-tech solution.

To learn more about TMS therapy for depression, please call the Advanced TMS Center at 949-768-2988. Our experienced medical providers can help the most difficult cases of depression, in fact, we specialize in cases that other doctors are not able to treat.

Brainsway has launched a new era, with a safe, effective* drug-free solution which can restore well-being for depression patients. This Deep TMS treatment (Deep Transcranial Magnetic Stimulation) is a non-invasive treatment which can stimulate the brain region responsible for depression.  Two out of every 3 TMS patients have a 50% improvement and one out of every 2 (50%) reach a  full remission.   This is AFTER they have failed 4 or more medications!

A generally well-tolerated outpatient depression treatment, Brainsway Deep TMS treatment does not require hospitalization or anesthesia, and entails no memory loss, no systemic side effects,  and no indefinite drug regimen.

A TMS Therapy with Proven Efficacy 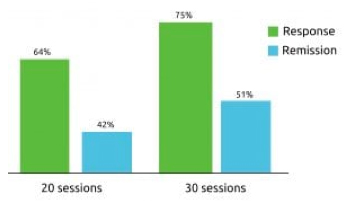 Deep TMS has been shown to have an even higher level of efficacy within real-life clinical settings, i.e. among patients receiving treatment in the field. Based on recorded data of over 1000 participants undergoing a course of dTMS treatment for MDD, approximately 75% of participants achieved a clinical response, with one out of two participants achieving remission.

Testimonials from our Patients

We are currently gathering testimonials from our own past patients. Check back soon! 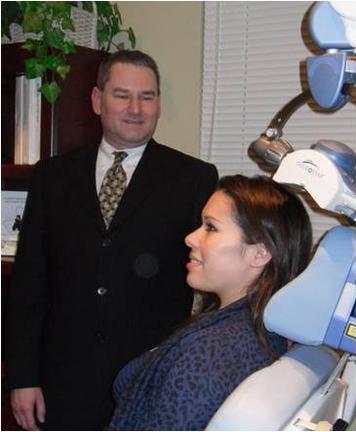 Nearly all insurance companies, including Tricare, Medicare, Blue Cross, Blue Shield, Healthnet, Cigna, Pacificare, United Healthcare, MHN, Aetna and government insurance, will cover TMS with certain conditions or restrictions, and require prior authorization. Copayments and deductibles vary and are subject to the terms and conditions of each individual insurance policy. Medi-cal/Cal Optima, CHIPA and Kaiser do not currently cover TMS. An evaluation appointment is needed to start TMS, and this evaluation is covered by insurance. We have a sliding scale for patients with a financial hardship if insurance does not cover TMS. Please call 949-768-2988 to speak to a TMS coordinator.

TMS has been used in other countries for depression and other conditions.  In 2008 the Neurostar TMS device was approved, and Dr. Kinback immediately ordered it.  The Brainsway device was approved in 2013, and Advanced TMS Center now has both devices.  Dr. Kinback is also trained on the Magpro TMS device.  Currently, the Advanced TMS center is the only practice in Orange County with both devices, and we have the longest track record with TMS in this area.  Dr. Kinback is one of the original members of the TMS Society.  He served the Society as Chairman of the insurance committee, and remains on the Board of Directors.  He has been active in the following CTMSS committees:  Executive, Research, Newsletter, Education, Insurance, and Standards Committees.  He publishes articles in the TMS Society Newsletter, The Magnet, and is on the Magnet Editorial Board.  Dr. Kinback actively lectures and teaches other psychiatrists about TMS.

Imagine waking up with a melancholy sigh at the thought of starting another day. You lay in bed, turning to the wall, hoping to shut out the external world and ward off your usual thoughts. Eventually, you might manage to get up, wash your face, and prepare yourself for leaving your house. Outside, the sun may be shining but its rays do little more than register as daylight, without really lighting your way.

For many individuals battling depression, these experiences are familiar ones, wearing them out before they have had a chance to open themselves up to promising new experiences. Fighting against these and other symptoms is a task that is arduous and frustrating, but nevertheless, they persist in their search for a treatment that works. Many have found TMS for depression to offer them significant symptom relief, allowing them to finally focus on other aspects of the human experience, and enjoy their lives in ways that were previously out of reach. Read on to learn more about this treatment and the benefits it holds for patients with depression.

Depression: A Sadness that is Hard to Name

We often mention depression, or describe our being depressed when we are feeling down, but what do we really know about this condition?

At its core, depression, or major depressive disorder as it is officially known, is a mood disorder characterized by low energy, sadness, hopelessness and a sense of emptiness or lacking. It is one of the earliest mental health disorders to be recognized and has been granted a great deal of attention for thousands of years. From being erroneously linked by the Ancient Greeks, to the accumulation of black bile, to Freud describing depression as mourning that has lost its conscious link, to what has been lost to us, to more empirically-based research that uncovered its biological and genetic risk factors – depression has fascinated theoreticians and troubled the minds of many of us.

One in 15 adults (or 6.7%) of the adult population struggles with depression. In the US, some 17.3 million adults (or 7.1%) have reported having experienced at least one depressive episode across their lifetime. 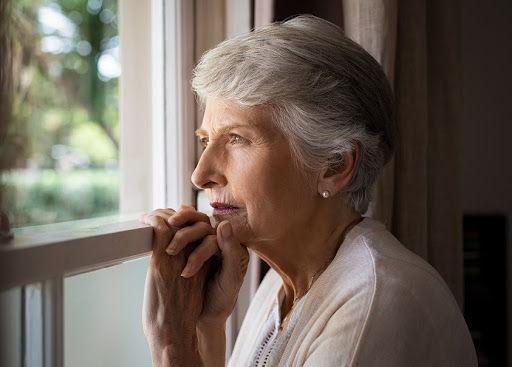 Though there is still much left to be understood about depression, scientific studies have revealed an existing association between this disorder and specific brain structures. In the case of the bilateral prefrontal cortex, disrupted neural activity in these structures appear in tandem with symptoms of depression. For this reason, some of the most effective and technologically advanced medical device treatments for depression focus on these specific structures, working to introduce a normative cadence of activation in them. Among these treatments is transcranial magnetic stimulation (or TMS), which has been shown to safely and effectively provide depression symptom relief.

TMS: A Promising Treatment Against Depression

Transcranial magnetic stimulation (or TMS) was developed in 1985, in an effort to address some of the drawbacks of an existing medical device treatment called electroconvulsive therapy (or ECT). ECT induces a short set of seizures through the use of electrical currents. While found to be very effective in treating depression (and particularly persistent depression), many patients balked at the thought of undergoing ECT due to the required anesthesia and significant side effects, such as short-term memory loss.

TMS similarly sought to bring about neural regulation but uses non-invasive technology to achieve this. It relies on electromagnetic pulses that safely reach the relevant brain structures and gradually establishes a stable normative pace. Its safety and efficacy have been studied by a number of well-regarded researchers and institutions, which have concluded that TMS is able to offer significant support to patients battling depression. Due to its advantages, TMS has been FDA-cleared to treat MDD and other conditions.

There are currently two types of TMS available on the market:

Traditional TMS: The original form of TMS, traditional TMS, uses a handheld figure-8 device to send out signals to the brain. It has been FDA-cleared to treat depression since 2008. Due to its apparatus, traditional TMS sometimes encounters targeting issues, as its handheld device may miss the relevant brain structure, which can affect its efficacy.

Deep TMS: FDA-cleared to treat depression since 2013, Deep TMS utilizes its own patented H-Coil technology, held inside a cushioned helmet, to send out its electromagnetic pulses. This allows Deep TMS to safely reach wider areas of the brain simultaneously, thereby avoiding the targeting issues found with traditional TMS. It also manages to reach deeper areas of the brain directly, regulating the neural activity of the relevant structures located there with less interference.

Who is More Likely to Benefit from TMS

TMS has been shown to offer safe and effective symptom relief to patients battling depression. 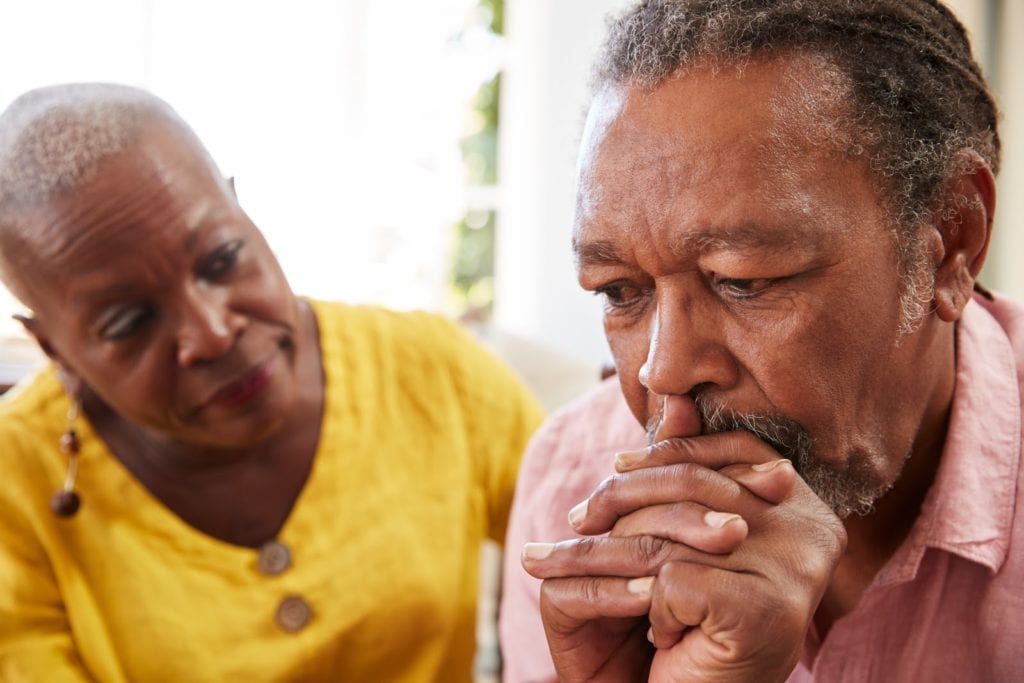 As a non-invasive treatment, TMS can also be incorporated into existing treatments, allowing patients to continue taking antidepressant medication, participate in psychotherapy, or partake in other forms of treatment while undergoing TMS treatment. A 2019 study published by the Journal of Psychiatric Research established this advantage, finding Deep TMS to achieve significantly higher remission rates in combination with pharmacotherapy, as opposed to pharmacotherapy alone. 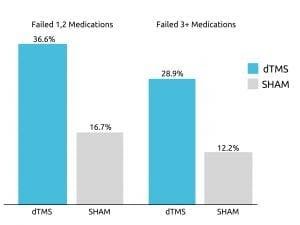 TMS has specifically been shown to benefit patients facing treatment-resistant depression. This is particularly important for patients who have found previous medication treatments to either be ineffective or cause such severe side effects that they were unable to continue taking them. Its efficacy with this population was highlighted in a 2015 multicenter sham-controlled study published in World Psychiatry, which found that Deep TMS helped one out of three patients with treatment-resistant depression achieve remission after four weeks of treatment.

The above-mentioned study also found that close to 80% of patients who did not immediately respond to the initial, acute stage or Deep TMS’s treatment protocol, went on to experience symptom improvement during the following continuation phase.

Deep TMS was found to have an even higher efficacy rate within a real-life setting, as opposed to that of a clinical study. From the data of over 1000 participants, around 75% achieved a clinical response following Deep TMS treatment, with one out of two patients achieving symptom remission.

Finally, due to its proven safety and tolerability, TMS is beneficial for patients—be they treatment-resistant or not—who have found their reaction to other treatments to be too adverse. A 2007 study published by Clinical Neurophysiology reaffirmed this conclusion, finding Deep TMS to be well-tolerated and not cause any adverse, long-lasting, physical or neurological side effects.